A render of G0Z, one of the most popular myths on Roblox

"When hunting a myth, it isn't to find who made it, but why it was made." ― Activvity

A myth is a story, specifically one that is unique to the social game platform Roblox. There are two kinds of myths on Roblox: folktales created by Roblox players, which are closely related to creepypastas, and actual accounts with a narrative using Roblox as a storytelling format.

Myth hunting revolves around the premise of "hunting" (another term for "investigating") Roblox myths. Myth hunters are players that actively investigate myths.

In the earliest forum posts of SmithCult, before myth groups were established, the predecessors of myth hunters called myths "creepypasta guys", or creepy/weird Roblox accounts. Many of them believed that myths were hackers or anomalies, if not real people. It is unknown how the term "myth" was actually coined, however it is widely agreed that myths are typically a Roblox account or a connected series of Roblox accounts that exist to tell a story, although some myths are actually myths in the traditional sense—folktales made up by Roblox players. These stories, if done properly, are told in a coherent, thorough, yet also mysterious method that is uncovered through rigorous investigation.

Much of a myth's story and character can be observed through all of what the myth has created, such as (if applicable) games, models, and decals, but this can also include a myth's dialogue or body language (i.e. the way that they interact and move in-game). The Roblox forums when they existed were also a method of myth storytelling, as observed in the ramblings of SmithCult. Some stories are of varying quality, but that does not mean that myths can be considered a "wannabe" or "edgy try-hard.", as anyone could be a Myth.

There is no such thing as a 'fake' or 'real' myth. The difference is how they portray their stories. Popular myths are popular because they’re able to tell a good story that is interesting and is able to grab a hunters' attention and maintain it.

One exception to this rule is when a Roblox player creates an account in order to insert themselves into an existing narrative without permission, such as fake Cult family members. This act is frowned upon by members of the community and warrants the term "wannabe", as they want to be a part of the myth, so they force themselves into the narrative without actually being involved.

In most Roblox groups, myths are ranked according to the quality of the games and the overall number of place visits of the myth game itself. Group myths and family myths are exceptions to this.

Occasionally, myths are also classified based on their behavior. For instance, a "hostile" myth will do everything they can to deter myth hunters and will actively temper with their investigation. Most myths are "safe" meaning that they will answer questions and are typically agreeable. Some myths are in-between.

Naturally, if any niche exists for a long time, archetypes will begin to pop up. Many myths can be categorized into one of several categories based on the general aesthetic or tone of the myth. These styles can include: clown myths, void styled myths, myths that focus on a Cult of some sort, surreal (or abstract) myths, or a family myth. Myths are not limited to just these styles and it is typically the mark of a unique and interesting myth if it does not pertain to any style altogether.

History of Myths on Roblox

Myths have been around for most of Roblox's history. Some of the earliest myths are 1x1x1x1 (an infamous group of people many users believed to be hackers) and Noli (a mysterious entity that nobody knows the origins of). The 2010s saw a rise in the number of myths on the Roblox site. Myths such as G0Z, Lezus, and many more showed up during this decade. Myth groups such as RMH were also founded during this decade. Today, myths are still popping up around the site, and there are more hunters than ever to investigate their mysteries. 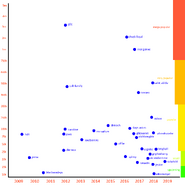