"Knowledge is a secret weapon, use it to discover and manipulate problems." ― Dkwb

Dkwb is one of the members of the popular myth known as The Ghlaxanes Family, along with Ghlaxanes and Stfil. Less information is known about him compared to the other members. Dkwb is recognized for his great building and complex story just like the other members.

Dkwb, also known as Abner, lives on an alien planet called “Ghlaxanes” where he was one of the biggest discoverers during the “Age of Discoveries” along with his friend Egor, with whom he discovered the Abyss . He was the one to discover an island far off into the oceans of the planet, later given the name “The Embassy”, and would have also discovered The Arc island. Now he works with his friend Egor to defeat ever-rebirthing Stfil and his planetary “mercy”.

Dkwb created his account on the 13th of November 2016, though he did not gather  as much attention at that time. It was only around March-April of 2017 that it would get some traction with his game “Mystery of an Ancient”.

He had been shouted in RMH a few times and growing a small cult following, for it was only during the March 18th craze that he was originally noticed, and eventually its own community, composing of various well-known veteran myth hunters like LxdySarah and mzeithur. Dkwb would only be seen a handful of times and occasionally hunted, though never surpassing his younger brother (in account age terms), Ghlaxanes.

Somewhere in the end of 2018, Dkwb would rename his game to “The Embassy” and, on January 3rd 2019, he would completely remake the game, adding onto it day after day throughout the rest of January. He would later retire along with the rest of the Ghlaxanes myth on the first of October 2020. Sometime in early-2022, he made his game private for seemingly development purposes.

Dkwb wears the “Punk Kid” accessory along with the “Eyepatch” accessory. He has the “Midnight Jester” shirt along with legs coloured Black to act as pants.

Dkwb remains as a mysterious person within the myth, and the most passive or kindest of the three members. Along with Egor, he enjoys discovering new places and findings to enrich their knowledge. He also takes a liking to talking about and reading books.

Abner probably suffers from a few Curse’s or Prophecy’s side effects, as he stated he is affected by it, but not entirely. He also most likely underwent memory loss along Egor, as Stfil said: “It seems as if Egor and Abner are slowly recovering their lost pieces of the memory we had together.” in the letter from Stfil to the Wiseful one. He is associated with the blue beam/arc.

The Embassy, discovered by Egor, is a faraway island on the oceans of the planet Ghlaxanes. It uses hidden teleports and buildings for the progression and storytelling, as well as some occasional NPCs with dialogue. The game is currently private but may be opened once again in the future.

After spawning, the player finds themselves in a vast hall, with floating light orbs around. In front of them stands a large, blue mind abductor reactor and the Arc symbol can be seen on the back wall of the room. Behind them is a smaller, empty hall section with the entrance to a library. A statue of Stfil, whose eyes change colour, is found at the back. Around the table in the middle of the room are humans or Ghlaxanians, all of which seem to be inanimate or dead, except one, whose dialogue refers to the Prophecy: “No one knows why it repeats. Is it always scary that you know nothing? No one even knows how it started. How did it all begin?”

A painting representing a statue can be found on this table, while another painting showing the red beam of the Arc is set against it. Next to the library is a painting room, in which many paintings referring to important places or elements can be seen, such as (most likely) the Arc of the gate, the Everlasting Bridge, and the green beam of the Arc. There’s also a painting showing the Arc symbol divided in three smaller parts, blue, red and green, which most likely refers to the three characters of the myth, Abner, Egor and Stfil. In front of another lying on an easel, once again representing the Arc, stands a painter, talking in Gibberish.

“To the ones that who have died, only have been rebirth. But these stupid people do not want their rebirth? Shameful!”.

These lines are referring to Stfil’s rebirth and the curse. On the left is a hallway that can be followed to a staircase with blocked off rooms, as well as one that leads to a tower. Touching the door to it will teleport the player to “The Forbidden Zone.” Here, the player will be on an island with another tower surrounded by water and many more islands like it. Text can be found at the top of this tower, which reads:

“Here lies the very first Tower of the great. It also became known as the Forbidden Tower. Beyond this very tower is more Forbidden Towers, which most are seen in the sea, surrounding the three islands. Rumor says that it’s meant to act as a protector of the three arcs, blocking any incoming threats that includes unknown energy, communication signals from the space above. Though communication signals have only been accepted if it is urgent. It is also said to be an blockade in order to stop anyone who have successfully escaped from the mind abductors, unless if they were allowed to leave under the name of Stfill.”

Back at The Embassy, in the room containing the arc, the player can walk to the back wall and somewhere on the right of the midpoint of that wall, should be a floor that they can fall through. This is a small maze, and somewhere in it is a blocked off room that can be looked at through the wall. Inside is an easter egg with Bob the Unknown. Somewhere near the start of the maze, a fake wall can also be found with a plate. Stepping on it will teleport the player to “The Curse.” The player will arrive in some sort of temple dressed similar to Stfil. In front of them should be a tablet that explains the origin of the Midnight Curse.

Ghlaxanes is the best friend of Abner, and fellow worker towards killing Stfil. They met each other at some point before the Age of Discoveries.

Stfil is the enemy of Dkwb, the person who he and Ghlaxanes work against to prevent him from releasing chaos.  There seems to be a small amount of interaction between them two. 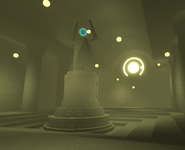 The spawn, with the reactor and the Arc symbol in the back

The painting with the red beam of the Arc. Two clouds rings can be seen above the island it is coming from.

The easter egg found in the maze

The teleport to “The Curse.”

Community content is available under CC-BY-SA unless otherwise noted.
Advertisement